UTLC ERA’s shareholders – the state railway monopolies of Russia, Kazakhstan and Belarus – gave Alexey a seemingly impossible task: to not only revive this ancient trade route but to make it profitable.

To their delight, this is precisely what Alexey has done. His success has even put the company on course to play a major role in one of the largest infrastructure projects in human history – China’s One Belt One Road Initiative.

From the start, the cards were stacked against Alexey. Railway shipping across Eurasia has historically been underutilised and UTLC ERA has had to compete with major players in air freight, which is quicker, and maritime shipping, which is cheaper.

Together, air and maritime shipping account for 94% of the market by weight and 64% by value. The only way for UTLC ERA to scrape out a larger market share was to remove the obstacles that make railway shipping relatively slow and expensive. Alexey uses one word to describe this solution: connectivity.

“The biggest challenge is developing connectivity, not only among our shareholders in various countries but also between all the people working for us in those countries,” Alexey says.

“No matter how developed your infrastructure is, the value of your project would be zero if you do not have the technologies and procedures at every stage to keep the trains moving quickly across borders.

“Connectivity and interoperability – I would say these are our two most important KPIs,” he adds. “The bottom line depends on the level of cooperation between people, companies and countries.” 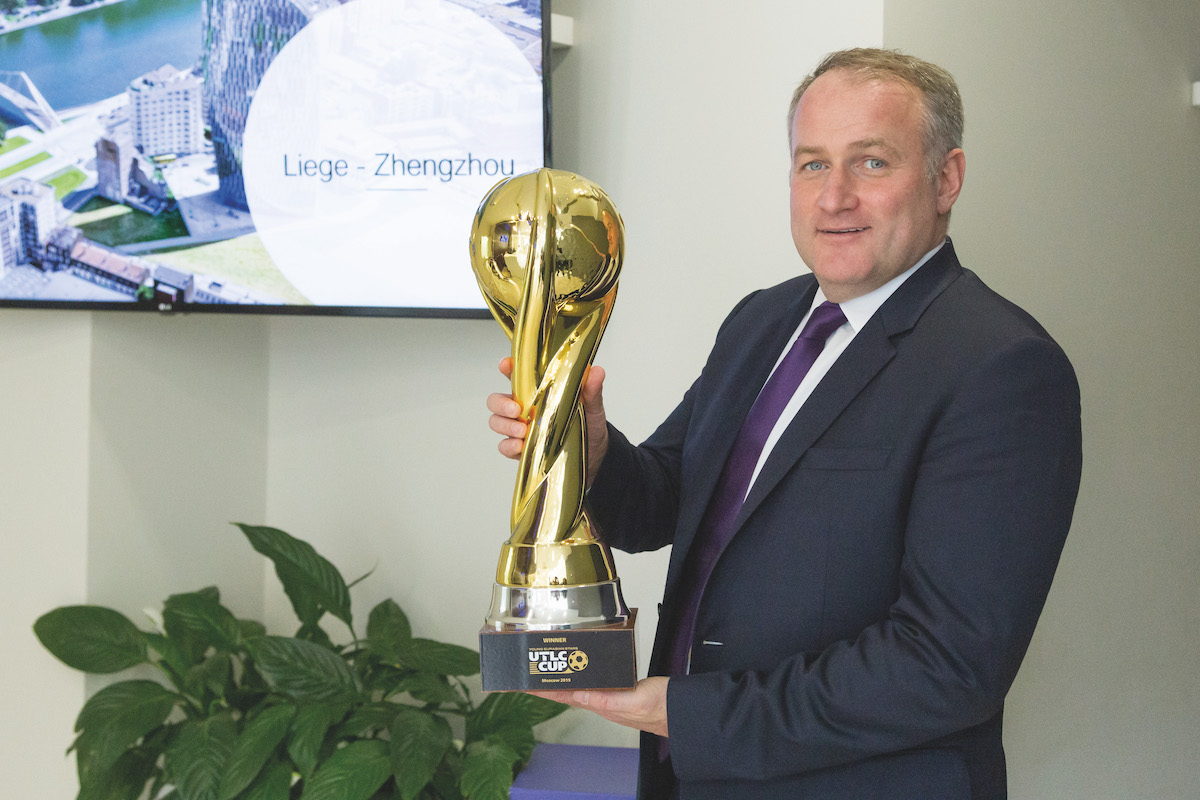 Alexey holds the trophy from the UTLC Cup, the international youth football tournament hosted by the company.


From the ground up

To maintain connectivity across the continent, Alexey has had to build UTLC ERA’s workforce and company culture from the ground up. “When I started three years ago, there was no operational model. There were conflicts among the shareholders and there were no teams at all,” Alexey says.

Luckily, this situation gave him a blank canvas on which to project his professional masterpiece. He organised teams and worked with them to make terminal procedures more efficient, and he negotiated with state authorities to standardise customs forms and remove barriers.

“This was an opportunity to draw on almost 25 years of working in the private transport industry and implement knowledge and experience in a state-owned project,” Alexey says. “This is what I enjoy: start doing something from scratch and delegate correctly so we can worry less about the past and look towards the future.”

“This is what I enjoy: start doing something from scratch and delegate correctly so we can worry less about the past and look towards the future.”

Although UTLC ERA is controlled by three government bodies, Alexey says he has had to draw on talent from both the public and the private sector to ensure the company’s competitiveness.

“I would say that about 80% of my colleagues and my team are all the specialists from the open market, mostly from the private sector. There are only a few from the public sector, who have been invited to the project because there are many important things that we need to coordinate and implement in cooperation with state structures, ministries and other institutes,” he says.

Joining the one million club

The results of Alexey’s connection-making and teambuilding have been nonstop year-on-year growth in the number of Twenty-foot Equivalent Units (TEUs), a type of standardised shipping container, that UTLC ERA has shipped across Eurasia, from just over 100,000 in 2016 and 175,000 in 2017 to more than 280,000 in 2018.

Emboldened by such unprecedented success, Alexey embraced an even more audacious goal – to ship one million TEUs across the continent annually by 2024. The announcement has raised some eyebrows. 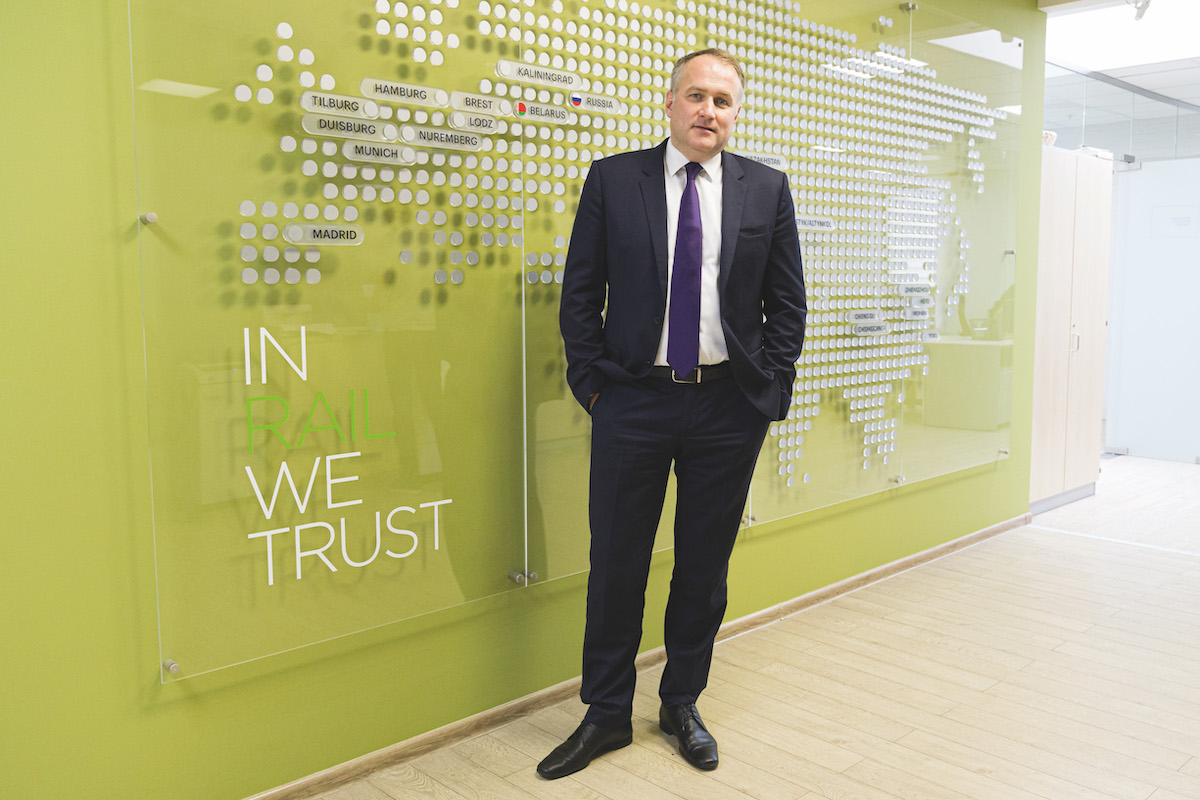 He recalls: “I remember speaking with a German railway CEO after setting up our business model, and he said, ‘Alexey, you know, 200,000 TEUs – this is the maximum of what you can get from your business model.’ And today, we’re already a third of the way to a million, and he’s in my office discussing future projects!”

The road to a million now depends on whether UTLC ERA can cut down the travel time between China and Europe from five days to four – a herculean feat that will require meticulous fine-tuning and heavy investment.

But with revenue growth projected to exceed 20% next year, Alexey refuses to let doubt overshadow his determination. “Our philosophy is very similar to that of Xi Jinping, the president of China. His One Belt One Road Initiative is like our one million containers goal. We’ve both set a difficult yet concrete target, and bit by bit we are expanding towards it,” Alexey says.

“The bottom line depends on the level of cooperation between people, companies and countries.”

He hopes his role in the revival of an ancient commercial route will have ramifications beyond pleasing shareholders – that it will strengthen social bonds across borders and raise living standards across the region.

“Railways are connecting not only companies in different countries but people as well. This industry has the potential to improve economic development and we’re seeing that where connectivity increases among people, revenue also increases,” Alexey says.

“I think there are many things that are uniting people across Eurasia at the moment, and railways are a very good example of how life can be made better for all of us.”